Seven of us went into the Little Yoho Valley to attempt a mountaineering trip up the Presidents (President and Vice-President) during the July long weekend. Despite that the weather wasn’t ideal, we all enjoyed the trip, and 5 of us made it to the summit of the President (but not VP). 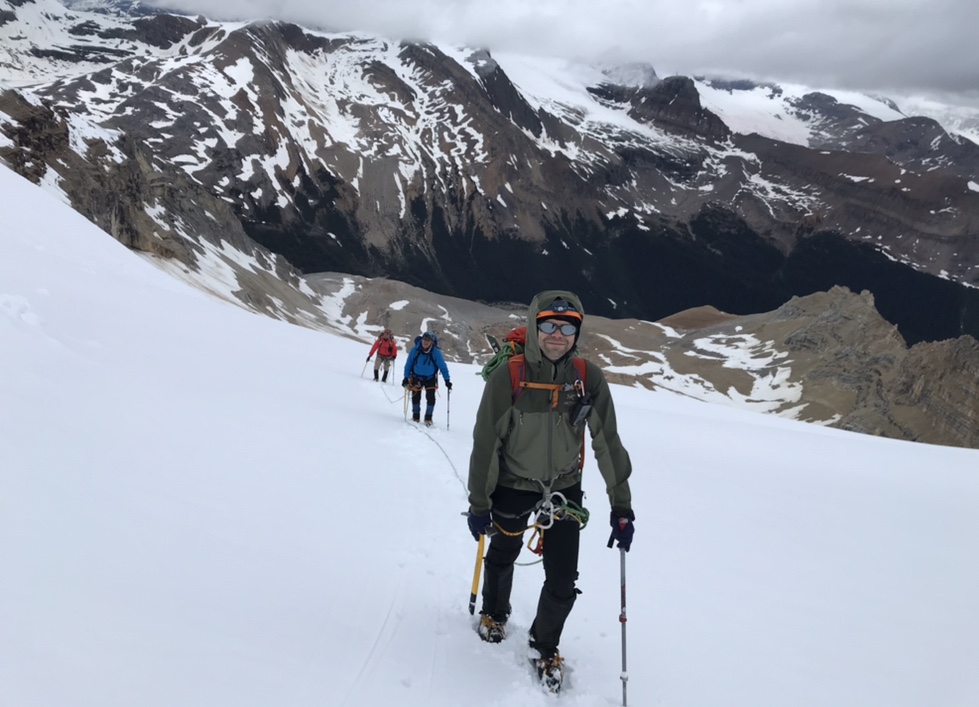 Our group, consisting of myself (Lisa), Oscar, Jag, Curtis, Ildar, Jason and Pete walked in on the Friday up to the campsite in the Little Yoho Valley (near the Stanley Mitchel hut). Our packs were heavy as we were bringing an extra day’s food for a bonus day of Kane scrambles after the President’s ascent, plus lots of snow pickets due to a report of very icy snow on the summits from Paul who was in there a few days before us.

As it turned out, snow fell during the few days before our ascent, hence the snow was softer allowing us to solo the summit section without pitching using the pickets. (However I do recommend that climbers bring 2 to 3 pickets per rope team for Prez/VP. This may allow pitching if a party member isn’t confident with the summit ascent (or descent). Also, even in late-season when the summits are dry of snow, the shrund just before the col can be difficult to cross and may require protection to traverse safely.) 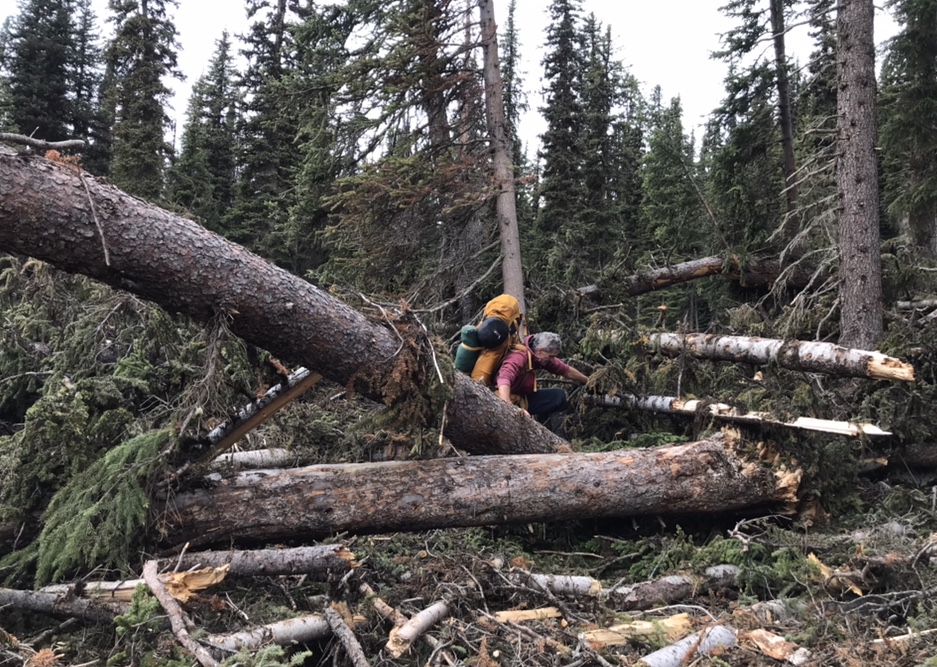 The last ½ km before the hut was difficult due to mountains of treefall brought down by late-spring avalanches. The easiest way through the deadfall was climbers left against the riverbank. On arrival in camp, Oscar and I went to scout up the first 30 min of the route, and the team went over our crevasse rescue technique before going to bed by 7pm to get some sleep before our early start. 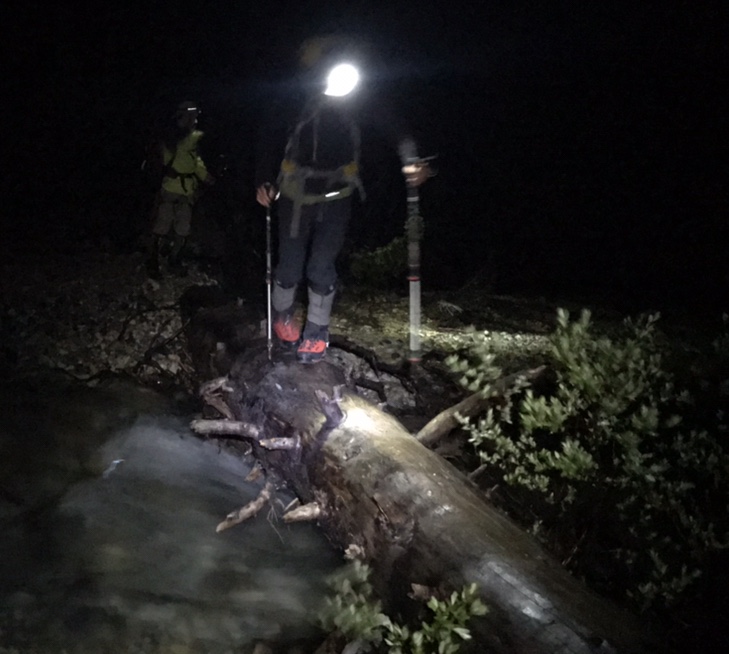 On summit day we got up shortly after 2am and were walking by 3.15am, making us the first team on the mountain that day (and giving us the privilege of breaking trail all the way to the col for the benefit of the 2 guided parties and one other private group following us). The glacier travel was uneventful, if interesting and reasonably scenic until we walked up into the cloud layer as we reached the col between President and Vice-President. We had a fairly strong group (for a club trip) in terms of glacier experience, with Pete and I having extensive experience on the much more challenging glaciated terrain of New Zealand mountains, and Ildar having completed rather rigorous mountaineering training through his former mountaineering club in Russia. The bergschrund just below the col was well bridged and presented no difficulty to cross, unlike the last time I’d been up there in late season. 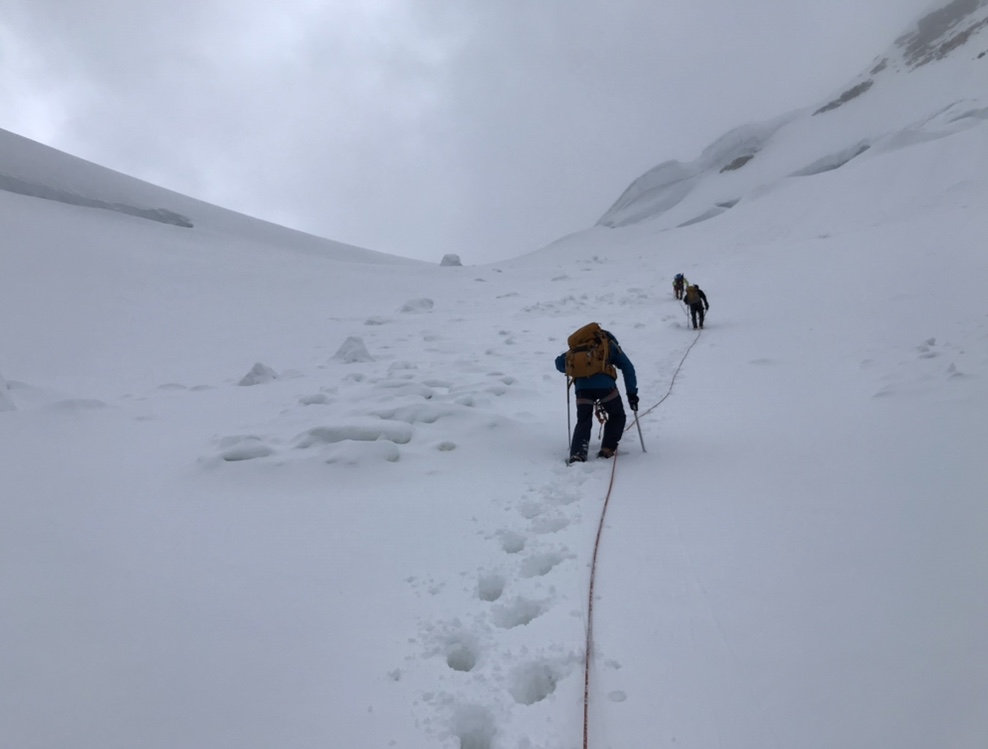 On the col we were overtaken by the three parties following us, as we debated whether to undertake the rather daunting looking President summit in the worsening weather. (Whiteout, and the summit was well plastered in snow.) The private party of three went ahead of us, which gave us a welcome break in the trail breaking. Two of our party decided to wait just above the col (one due to gear issues and one having had sufficient past experience with whiteout summits and not interested in a repeat), while the rest of us unroped to solo the summit section. We soloed because there were no crevasses from a short way above the col, and because climbing roped without runners creates unnecessary risk. (Guide’s studies have proven that a challenging ice axe self arrest is rarely successful when done by a roped team falling while tied together.) 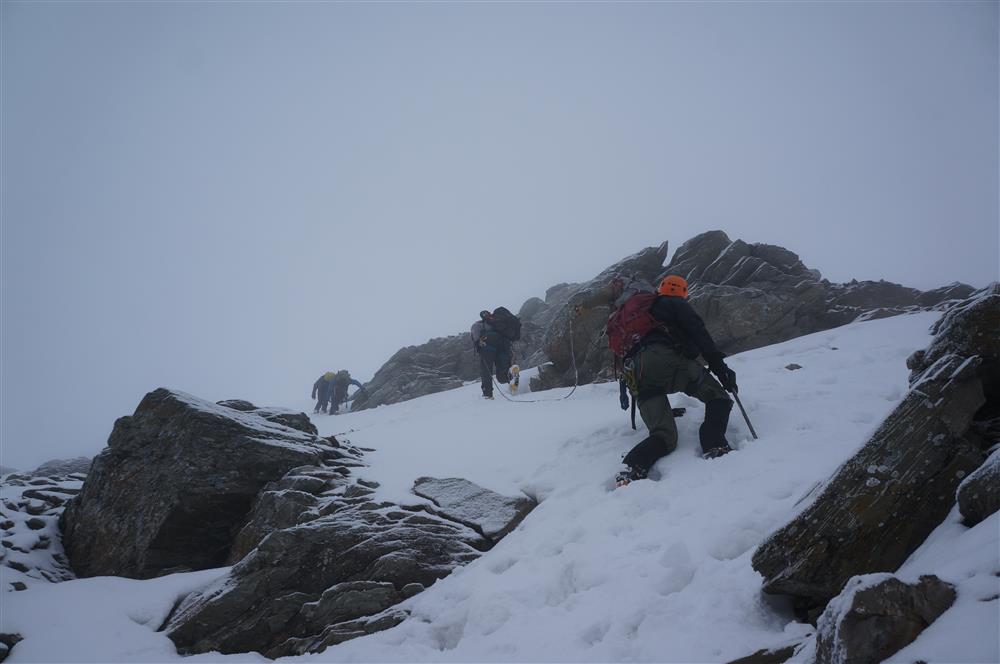 (Photo by Ildar, of the party in front of us)

For safety during this ascent, I was pleased that many of our party had joined our CSMC ice axe self arrest practice session a couple of weeks earlier. A slip on the summit section would have presented a risky and difficult self arrest, with the chances of surviving a fall considerably higher for someone who’d rehearsed the techniques recently. (Including the critical importance of raising the feet for a successful self arrest while wearing crampons.) That said, there were several sections where falling was a very bad idea. We took our time and watched out for each other, placing our ice axes up to the hilt (where possible) as a strong protection should the crampons slip. This summit climb was a lot more challenging than the previous time I’d climbed it as a moderate-grade rock scramble in late season. 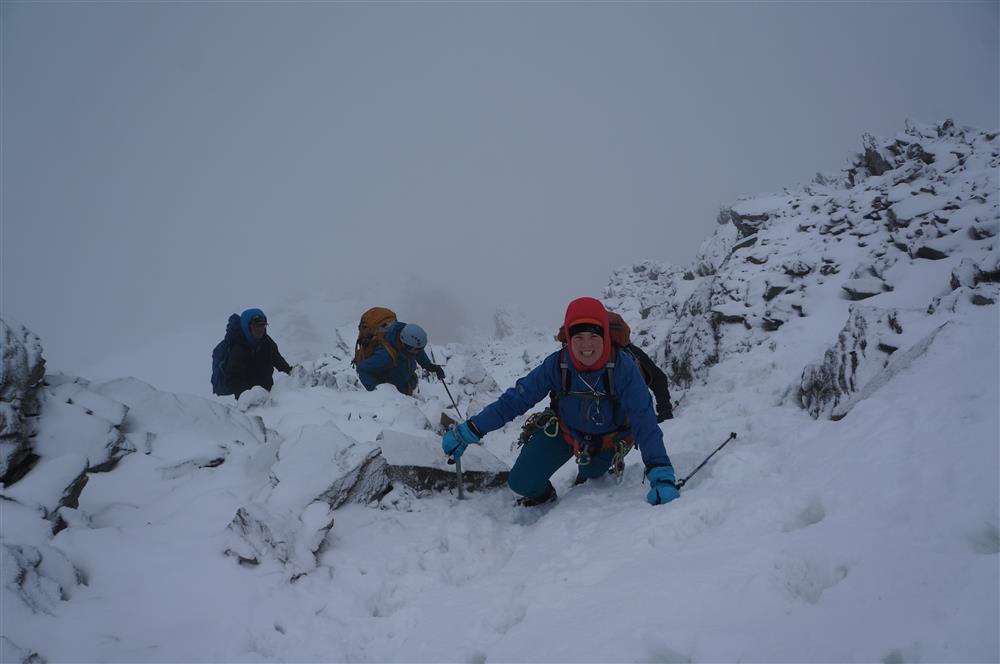 Nearing the summit we overtook the three other parties, and decided to continue to the real summit past the point where the guides too their clients just before the summit. Some debate occurred as to where the real summit was (in total whiteout), and we continued a short way down past the summit before we managed to convince our gps’s that we really had made it, reaching the summit around 9am. We took some pics and I InReached Tom from the summit to report our success, and then we headed down, taking our time as the descent proved considerably more intimidating to the less experienced members of the team, as descents always are.

Reaching the col, our two team members were ready to head down promptly, being very cold from waiting in the poor weather for our slow summit climb. One of our summit group clipped in to their rope of 3, and our second rope of 4 followed soon after. Nobody (including the guided parties) considered climbing VP in the poor weather and challenging snow conditions.

The glacial descent was fast and uneventful, except for an accidental detour off route through the cliff bands at the bottom of the valley, due to carelessly following one of the guided parties (it turned out the guide was teaching his client how to route find through bluffed out rock terrain.) We were exhausted but very happy with our success on arrival in camp around 1pm.

After a much-needed nap, Oscar, Pete and Jag decided to head out that evening. Idar, Curtis, Jason and I stayed another night, for an ascent of the first peak of Mt Kerr the following day. We stopped short of climbing the main Kerr summit as once again the weather packed in as we were approaching the summit. Curtis did a nice job of leading the group this day, with welcome assistance from Jason’s good route-finding and cairn-spotting skills on the descent. Kerr is graded as an easy Kane scramble, although I’d put it at the harder end of “easy” (even without some snow sections increasing the difficulty for us). 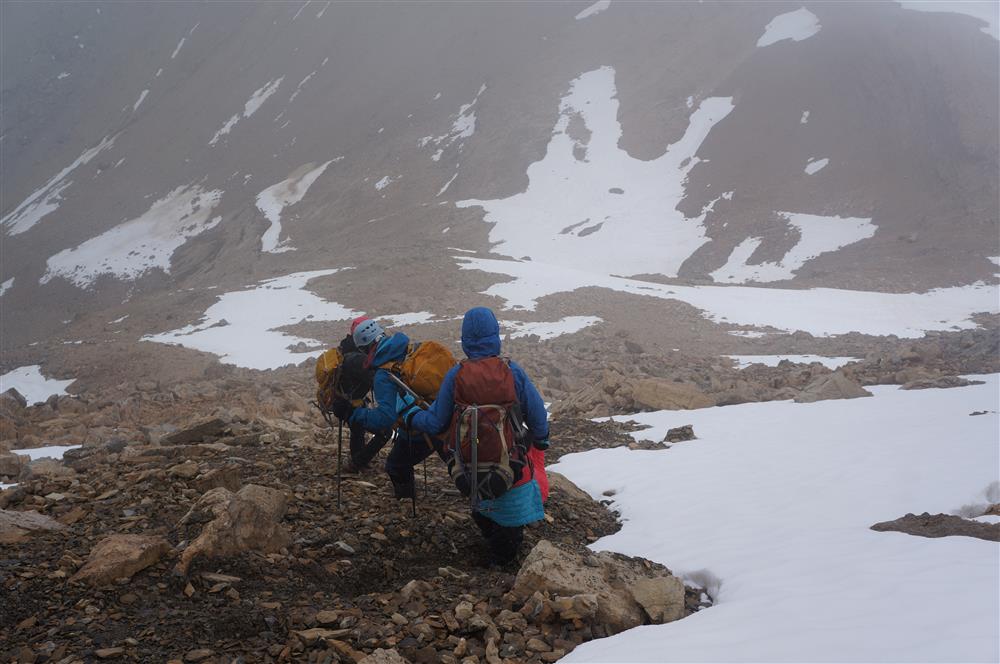 Arriving back at camp around lunchtime, we had a break and then walked out – getting home a day earlier than planned due to very poor weather forecast for the Monday.

A very fun, social, and successful mountaineering trip. Thanks to the whole team for the camaraderie and supporting in various ways to make this trip happen, for helping to carry the heavy gear (as I was rather unfit for such a challenging trip this early season!), as always to Tom for leading the CSMC as President and helping in many ways to make this trip possible, to Jag for renting us two large tents, and especially to Oscar who stepped in late to co-lead this trip with me, and picked up a fair bit of the administrative work to make the trip happen. This was a great start to the 2018 climbing season! I am looking forward to many more great CSMC trips this summer.