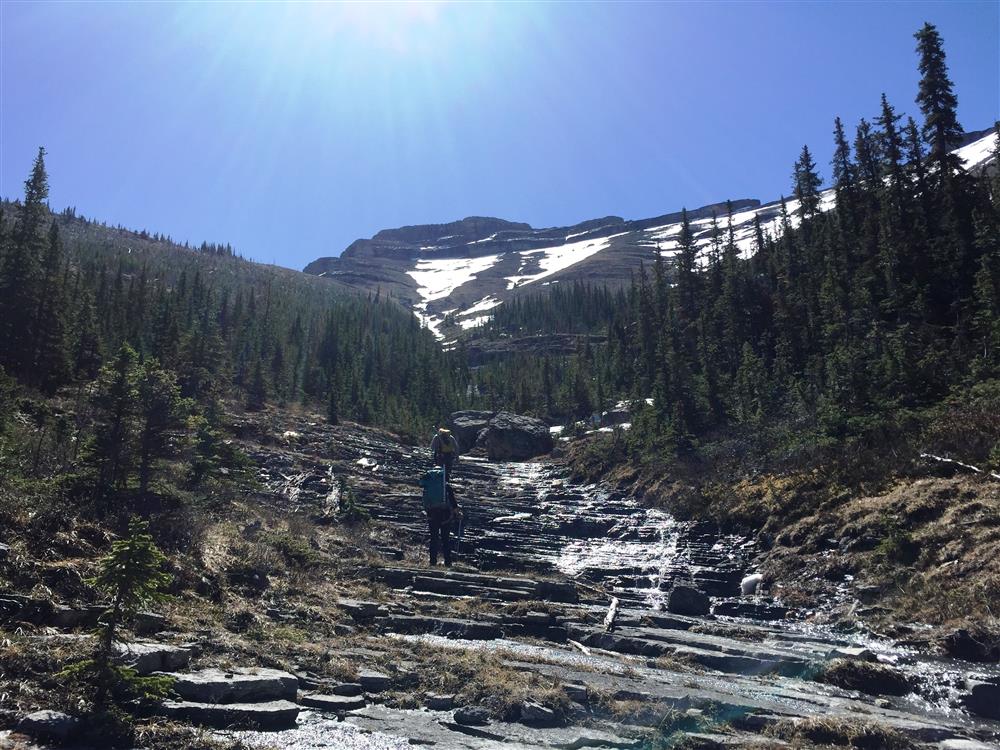 Fit parties could do this in 8 hours from the bottom of the “Big Hill” to quote Cornelius of www.spectacularmountains.com. We must be “unfit” because we took considerably longer.
There were mitigating circumstances of course, high river levels,wet ,snowy, icy conditions and the occasional navigation errors extending our day. We weren’t complaining though as the
sun shone brightly winds were light and the temperatures remained moderate all day. Rather unusual for the Victoria Day weekend which in most years serves up cooler conditions
for hardy campers eager to kick off the season.

I haven’t been in the Ghost very often. Most of my trips have been in early spring to climb ice. Being a warm long weekend I wondered how rowdy it would be. News reports from previous years
seemed to paint the area as the “Wild West” lawless and loud. Every patch of suitable camping filled to capacity; fires blazing, coolers oveflowing with beer and 4x4s swarming
over the countryside.. Maybe it was the crisp night on Friday thinned the herds or the campers were still cocooned in their sleeping bags but it was a quiet uneventful drive there in Laura’s Jeep.
The road was in reasonable shape and we saw many regular cars at campsites right to the bottom of the “Big Hill”.

Very high water in the river. We elected to wade in right away. Strong currents with water levels running knee high or slightly higher. Once across we followed the vehicle track on the cobble flats as long
as possible moving to the trees for short stretches. Didn’t have to cross the river again. The canyon approach had flowing water so boulder hopping, dry sandbar walking and one snowbridge where the
canyon chokes got us to the waterfalls. We took the left cutoff mentioned in the Spectacular Mountains report which was cairned and scrambled up the wet headwall. A little unnerving but not too
slippery. The thoughts of downclimbing weren’t appealing so I hoped we would find Vern’s easy trail on the climber’s right. Looking over that direction we could see new flagging buoying our hopes
for the descent. A very pleasant staircase followed right up to the grassy slopes and snow covered scree.

Looking up as we ate lunch I expected a long slow climb. Actually it was an illusion. It didn’t take long at all to reach our snow traverse over to the low spot on the first cliff band. The 2m deep
snow formed a nice solid ramp up the gully. It was icy towards the top but easily mangable with crampons and ice axe. Yeah we aced the first difficult bit.. It looked easiest to follow the snow patches.
Turning climber’s left and across a dry wide edge got us to another easy snow ramp and on to the crux climb on the east end of the summit block. The crux photos from other reports look scary but really
the dry rock was fine. Everyone easily climbed the short 2m high slightly overhanging lip onto a ledge followed by the vertical 5m face with good solid hand and footholds. The summit plateau was
way wider and longer than I imagined. Very comfortable to hang out on indeed..

No summit register in the cannister as the previous party reported. After the usual summit cheers and photos we headed back down. No one used the rope I setup just in case. We retraced our steps and
carefully crossed the snow postholing as we went. Not that bad as it was only a short stretch. Normally I would relish quickstepping down snow but the scree was a far better option today. Another food and
drink break at our lunch spot and we headed back down the stream bed until we arrived at the first waterfall. A wrong guess to go left into the trees hoping to find the easy path had us bushwacking looking for easier options .
After a short rap down a slabby cliff we peered over the canyon rim. No not my cup of tea. Downclimbing wet rock by backtracking to our ascent route would be less risky.
Heading back along the lower ledge I hoped we wouldn’t have to climb back up. Fortunately we came out under the first waterfall so worst case we could wander over to the cliff band skiers right and
downclimb. Luckily we spotted flagging on the trees skiers left and there it was a very well worn trail right along the base of the canyon to the bottom of the falls. The easiest way down would be
right at the first falls downclimb easy rock and swing back left across the top of the second falls to take the trail. An easier ascent route too no doubt.

The return trip along the river seemed shorter and as we arrived at the ford we were greeted by gunfire, buzzing chainsaws and gridlock as arriving campers clogged the road by the waters edge.
An instant tent city. had sprung up since we left in the morning. The news reports might be more accurate than I thought. We expected a sheriff and deputies to keep law and order but the pony express hadn’t reached the fort yet .
Our drive out was uneventful and approaching vehicles seemed to be driving decently. How would I describe our trip. It was Good Bad and Ugly. Predominately good though. And we took the stairs when we could.
Thanks to Laura for expertly driving us there and back, Andrew for assisting with the climbs and river crossing.
A great day to be out and about with very fine friendly companions.

Lightning Peak was a great option for May long weekend. We biked in for about 4.5km along two forestry roads, most of which was in great shape, but there were some sections where rocks/steepness/deadfall made us walk around. I recommend following Bob Spirko’s route closely after leaving the road and start up the creek bed as it follows a ridge where the trees are thinnest. Once up on the ridge, it’s a pleasant 2.5km ridge walk to get to the summit with some short sections of moderate scrambling along the way.

When you hear “Moose Mountain”, you may not always think of scrambling but it’s actually a pretty fun shoulder season trip if you avoid the usual route.

The most fun scrambling is on the rocky spine of the SW ridge. The least fun is side sloping through steep, loose rubble to circumvent cliff bands when descending from the SE ridge.

What a difference 4 weeks makes. The knee to waist deep snow is gone and its relatively quick to gain the 600m vertical to the peak in under two hours. We extended the trip by heading north dropping down to a col on the connecting ridge to Holy Cross Mountain. There is still some lingering snow among the trees,  knee deep occasionally. We made short work of it and didn’t encounter more than a few small patches after that. Very obvious and good trail to the Grass Pass..Far more interesting than the direct trail up the creek from the road. Once at the Grass Pass we sat in the sun and had lunch. Unfortunately the hungry ticks were having the same idea. I seemed to be the target. and my companions swiftly brushed off 5 or 6 from my jacket before we got going again. We headed up to the right along the ridge to a highpoint known as Boundary Pine.. A large stand of old limber pines cover the west slopes. They lean away from the prevailing west winds.. I haven’t seen this in the Rockies however it is very common on seacoasts where constant winds seem to cause foliage to grow on the leeward side of the trunk and the whole tree leans away from the wind. No gales or heavy wind from the west today just a light cooling breeze. From there we headed directly down the ridge sometime on a well marked trail . Other times just crossing open ground avoiding deadfall or brush. As we neared the end of the ridge it looked like a dropoff would  halt progress .We did notice a rubbly break that brought us down to some scree slopes that almost reached the road. This section was the only real scrambling of the day.  Some Bighorn Ewes and their offspring were munching the new grass on the roadside on the way back to the car. Its been a long winter so I’m sure they were eager to stock up on some quality feed. We  stopped at Marv’s diner in Black Diamond on the way home for some well earned burgers and shakes. Yes a very relaxing leisurely day with great company. Better keep an eye out for those unwelcome hitchhikers for the next few weeks. I know I’ll be scouring the car for a few days for the eight legged creatures. Good thing my dear wife is away until Tuesday. LOL 🙂 Thank you all for joning me on a most excellent adventure ticks and all.

I would like to thank Gerry and Erich for their help in checking over the club’s gear and help with creating an inventory.  This inventory has now been posted in the Documents section of the website as well as the Gear List page (which can be found under the Training and Gear tab.

This is how things looked when we started. 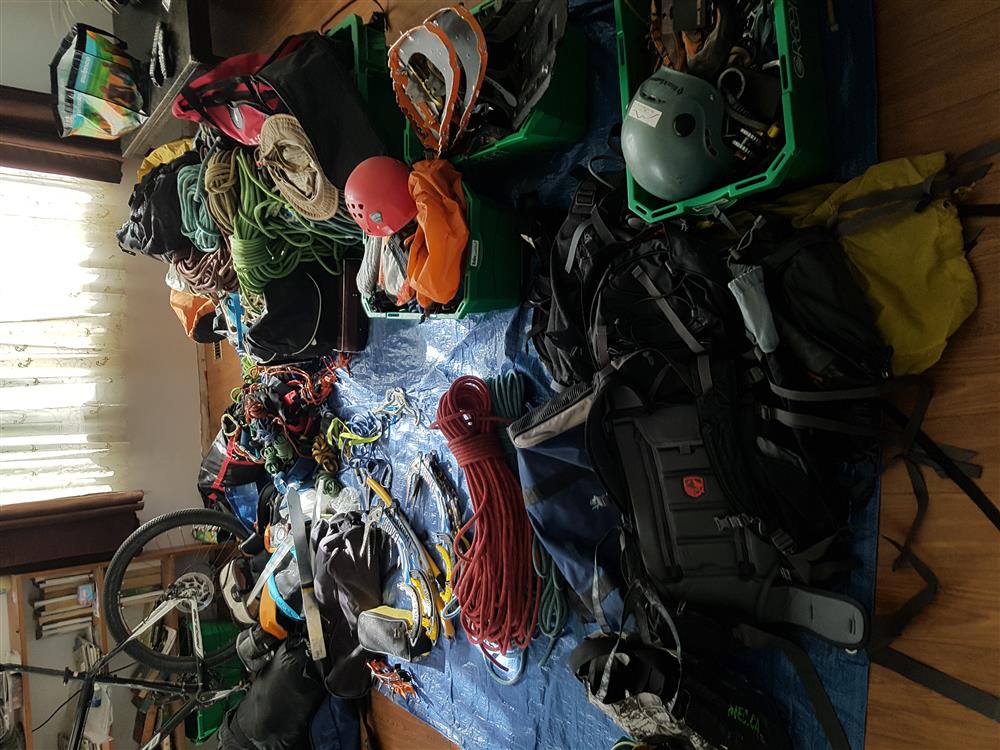 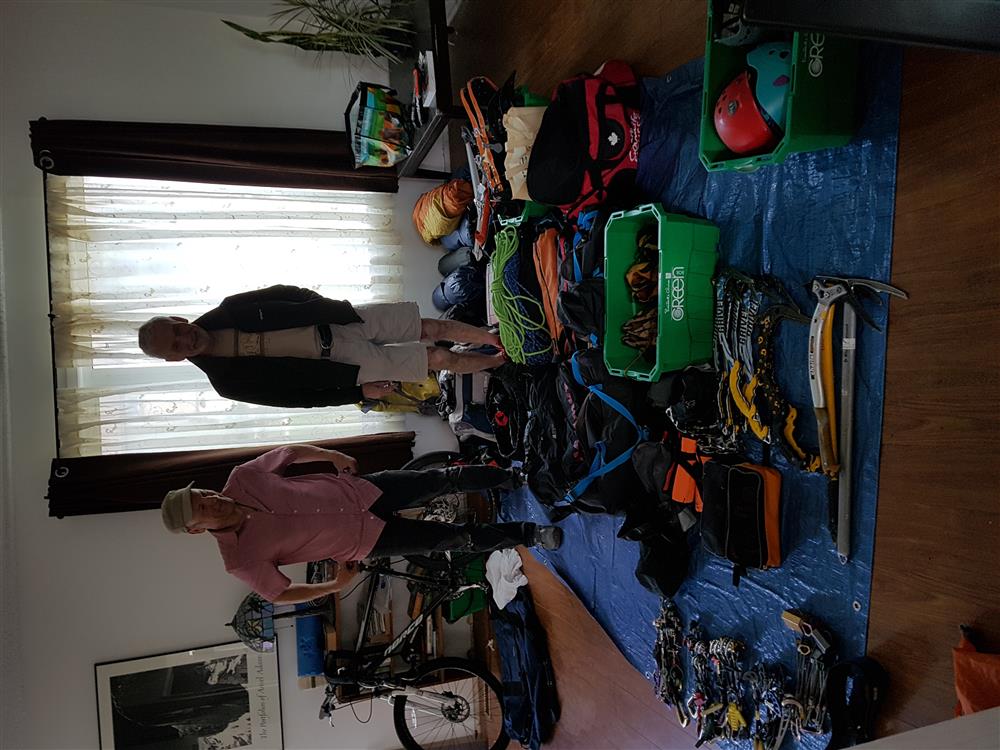 We had a great time climbing and putting up ropes in creative ways at the crag after work. It was Edgar and SangMi’s first time climbing outdoors and I’m pretty sure they’ll be back for more:)

I posted some more pictures of the event on Facebook, go have a look!

Thank you to the members for joining me for such a fun and adventurous evening! Until next time!
Anna